Blog
You are here: Home1 / Blog2 / family3 / The Secret to a Long, Happy Marriage

This Friday, March 16, marks the 33rd anniversary of the day that Mike and I were married. On that day in 1979 we were just two crazy (and crazy about each other) eighteen-year-olds, with no idea, really, of what it meant to be married or to make a life together. I'm sure our parents had their doubts about whether we were even capable of taking care of ourselves. We had just graduated from our respective high schools less than a year before. Nevertheless, with our parents and friends there in support, we walked down the aisle and started our adventure together. 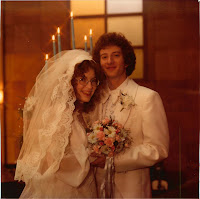 Our parents probably were right to worry. Both of us were not just young, but immature in many ways. We loved each other (as much as we understood what that meant back then), but we married for many of the “wrong” reasons. Each of us was lonely and looking for someone to make the loneliness go away. Although we had a lot in common — a love of music, a heart for ministry, and many shared values and priorities — we were very, very different people. Mike was the responsible, gifted introvert who was drawn to my outgoing, articulate, life-of-the-party personality. I was the insecure, fearful girl who believed that this steady, reliable, self-sacrificing man would take care of me. 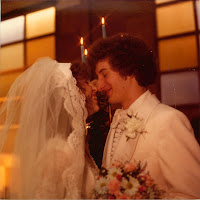 Funny thing, though — those “complementary” differences that were so appealing in the early years became irritations that drove us apart as the years passed. Over time, the steady, reliable provider became a judgmental grouch, and the life of the party became a selfish, defensive shrew. A few people closest to us know that we almost didn't make it to 33 years. A couple of times, we almost called it quits, tired and frustrated and fed up with hurting each other.

I think of those times when people congratulate us on the sadly rare accomplishment of keeping a marriage together for more than three decades. “If you only knew,” I think. Some people seem to think we've figured out a secret that appears to be hidden to much of the rest of the world. So as we are celebrating this milestone, I thought I'd let folks in on the secret:

There is no secret.

There is no magic pill or special dispensation that keeps a couple together for this long. There's nothing special about us, or about our relationship — at least nothing that's not available to everybody else. Sustaining a long marriage is just about accepting the reality that being married isn't fun all the time. Sharing your life with another person has its joys, but it's not easy. When the conflicts and hard times come — and I promise you, they will come — you have to be willing to do the hard work of

Sometimes I haven't wanted to do that hard work. Sometimes Mike hasn't. Sometimes it has seemed too much to ask, to keep working through the differences that divide us, and too hard to remember the things that brought us together. Nobody can hurt you more than the person you're closest to, and we've given each other plenty of opportunities to practice extending grace and forgiveness.

Our culture, especially modern media, promotes a vision of love as one big passionate, romantic adventure, in which two people are swept away on waves of emotion as they find completeness in each other. Our society seems to be addicted to the overwhelming, all-consuming feelings that come at the beginning of a relationship. And when the emotions wane, when the feelings change — and they always do — then that's taken as a sign that the love is gone, and the two people owe it to themselves to move on, to find someone who makes them happy.

Here's what I've learned out of these decades of ups and downs: it's not Mike's job to make me happy. I'm responsible for my own happiness, and if I can't be happy with him, I probably won't be happy with somebody else either. As evidence of that truth I need look no further than the serial relationships that so many celebrities find with one “soul mate” after another.

Love isn't about feelings. Feelings come and go, and over thirty-plus years they've come and gone many times in many different iterations. Love is a decision to stay when the feelings aren't so fun, to stand by that person that you made a commitment to, because a commitment means something. Vows mean something. 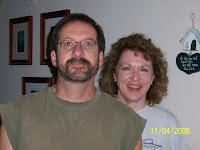 We are a living testament to the truth that there is virtually no wound that can't heal, no offense that can't be forgiven, no incompatibility that can't be overcome . . . if — and this is a huge if — the people involved are willing to do the work of forgiveness and reconciliation. Grace exists. Compromise is possible.

Thank you, Mike, for doing the work all these years. Fortunately, it's still fun most of the time. Maybe, if we have another thirty years to practice, we might eventually get it right. I plan to stick around and find out. 🙂