Last week a story on NPR talked about the religious community's response to Occupy Wall Street and the plight of the poor. Among others, the story interviewed a pastor (in California, I think) who had recently preached on the topic of social injustice and expounded on a passage in Isaiah to support his validation of the Occupy movement's demands for government action to force social change. 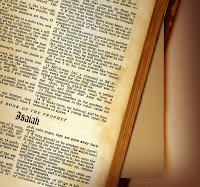 “Is not this the kind of fasting I have chosen: to loose the chains of injustice and untie the cords of the yoke, to set the oppressed free and break every yoke? Is it not to share your food with the hungry and to provide the poor wanderer with shelter–when you see the naked, to clothe him, and not to turn away from your own flesh and blood? Then your light will break forth like the dawn, and your healing will quickly appear; then your righteousness will go before you, and the glory of the Lord will be your rear guard. Then you will call, and the Lord will answer; you will cry for help, and he will say: Here am I. If you do away with the yoke of oppression, with the pointing finger and malicious talk, and if you spend yourselves in behalf of the hungry and satisfy the needs of the oppressed, then your light will rise in the darkness, and your night will become like the noonday. The Lord will guide you always; he will satisfy your needs in a sun-scorched land and will strengthen your frame.”

In the NPR story, this pastor's sermon was an example of religious support for the demands that the wealthy should be required to contribute more, that the government should take more action to provide for the poor and needy. This passage was quoted to support protest gatherings like those sponsored by the Occupy movement, asserting that, because the Bible tells us to feed the poor, it's therefore right and valid to gather to demand action by the government and the wealthy to “fix” wealth inequality.

The Bible clearly tells us, both here and elsewhere, that we should feed the poor and care for the needy. Nevertheless, I disagree with the theme of this pastor's message, of the NPR story, and of the Occupy movement (on this point, at least). I believe that it's a misuse of the Bible, to take a passage like this and use it as a justification for public complaints that the government and the rich–the others–aren't doing enough to fix the problems of the poor and general injustice.

I don't believe that these words are meant to be used that way. This passage, like the whole Bible, is not meant to be used as a club to force others to change. It is meant as a message to me, to each of us, personally, as an individual. I am to read it as God's Word to ME, telling ME what I should be doing. I'm not supposed to be digging through it looking for words to use as proof that somebody else is wrong, to scold somebody else and demand that they change their behavior.

Should we feed the poor and care for the helpless? Yes. But it's not my job to read the Bible to find out what other people should do. It's my job to read it and DO WHAT I FIND THERE. If I do that, if each one of us does that, then the poor will be cared for, the oppressed will be set free, and the hungry will be fed. It's just that simple.

None of us can fix the problem alone, but each one of us can do something. We can help the people we see, those who come across our path. We can teach our own children to live that way–watching for opportunities to help those less fortunate than we are. We can join together voluntarily with other like-minded individuals to undertake collective efforts–the soup kitchen, the food pantry, the church ministries. Each of us can lead by example instead of by harsh and unkind rhetoric.

But gathering in a park to talk about what somebody else is not doing? All that does is alienate, separate, frustrate. Nobody gets fed, no one is set free. It's talk masquerading as action. It's criticism and jealousy replacing personal responsibility. It's the “pointing finger and malicious talk” that Isaiah condemns in the passage quoted above.

I, too, want to see the hungry fed and the downtrodden lifted up. But I don't like to see the Bible used as a weapon. I truly don't believe that's why it was given to us. It's not my job to MAKE somebody else do what the Bible says. It's my job to do it myself. Until I do, I lack the moral authority to persuade anybody else to change her ways. Each of us needs to stop looking around to see what somebody else is doing or not doing, and start looking in the mirror and changing our own behavior to align it with what the Bible asks of us.

What do you think?

Whose Fault Is My Failure?iPhone & iPad Fun – 3 of My Favorite Apps
Scroll to top