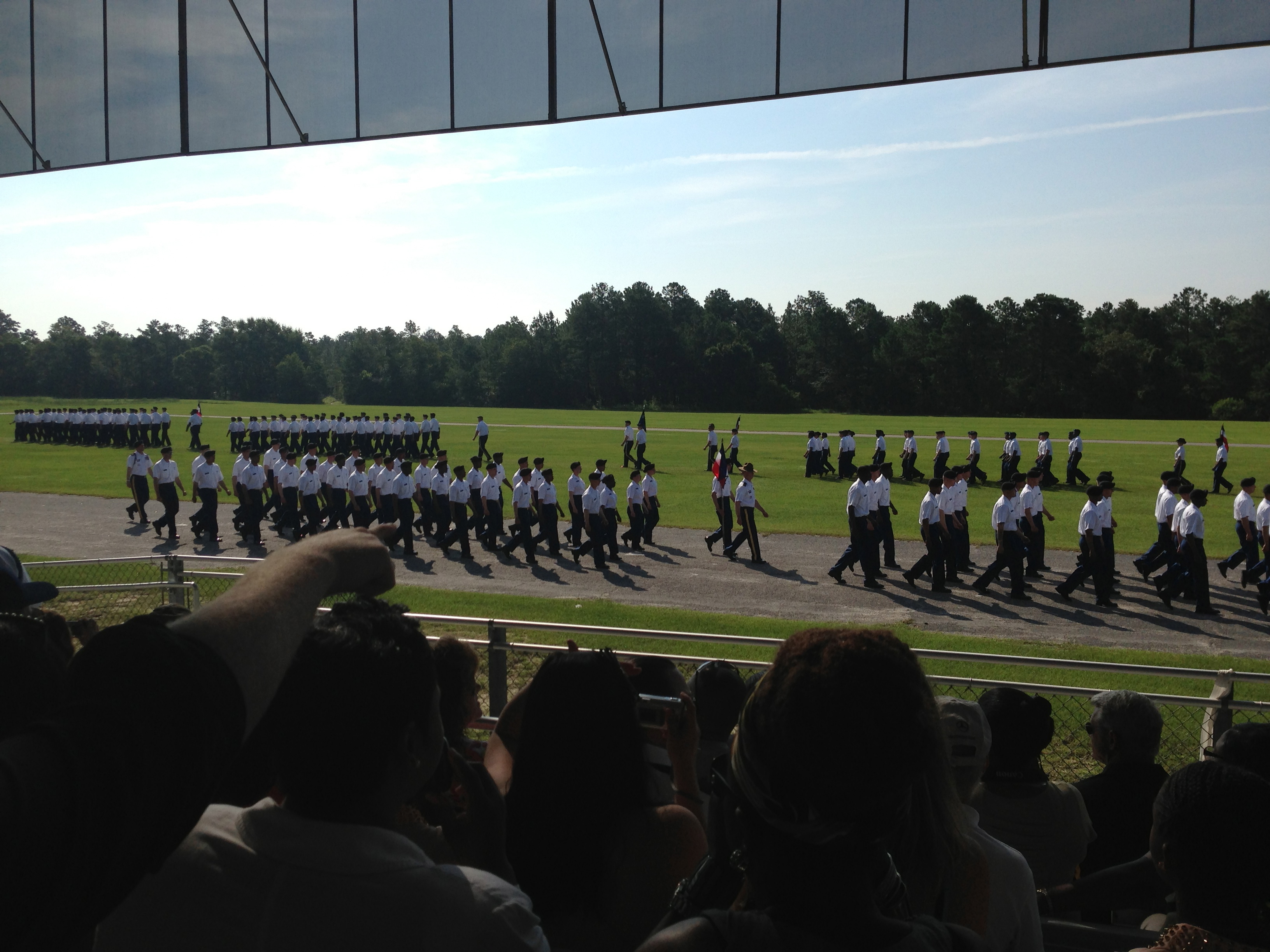 Last week my husband and I made a quick trip to Fort Jackson in South Carolina to attend our middle son’s graduation from Army boot camp. (Benjamin served six years in the US Navy, with two deployments on two different ships. He left the Navy in December 2012, married his best friend–whom he had met while they both served on the same ship–on February 27, 2013, and then they both enlisted in the Army Reserves. He left in May to start the ten-week basic training cycle; she followed him in late June. They won’t see each other again until she graduates in September.) 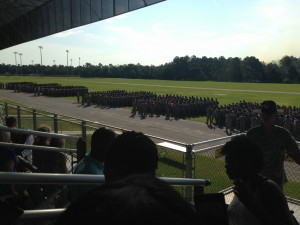 About a thousand young men and women officially became soldiers during the ceremony last week. As I sat in the stands, watching these young people march in formation onto the field and stand at attention in front of the assembled crowd, I realized that each person on that field was somebody’s little boy or little girl. Soldiers, yes. Trained in combat skills, yes. But still, somebody’s baby. Every one of them has someone who feels about him or her the way I feel about Benjamin.

At one point all one-thousand-plus of them recited, loud and proud, the Soldier’s Creed:

I am an American Soldier. I am a warrior and a member of a team. I serve the people of the United States, and live the Army Values. I will always place the mission first. I will never accept defeat. I will never quit. I will never leave a fallen comrade. I am disciplined, physically and mentally tough, trained and proficient in my warrior tasks and drills. I always maintain my arms, my equipment and myself. I am an expert and I am a professional. I stand ready to deploy, engage, and destroy the enemies of the United States of America in close combat. I am a guardian of freedom and the American way of life. I am an American Soldier.

I’m proud of Benjamin, of course. 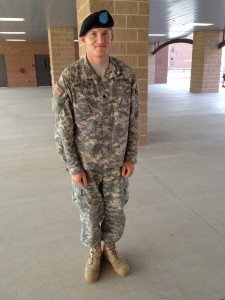 But I have mixed feelings about his choice to serve in the Army reserves. As I watched the graduation ceremony, my fears were particularly stirred by the line I’ve bolded above: “I stand ready to deploy, engage, and destroy the enemies of the United States of America in close combat.” This mission is, in my mind at least, what distinguishes the Army from the Navy, where my son and his new wife both have served. Close combat.

While he was in the Navy, I of course realized that he could be in harm’s way. But I consoled myself with the belief that it was unlikely that he’d ever be on the ground with a gun in his hand. I no longer have that consolation, because the Army’s job is precisely that: to be on the ground, with guns, ready to engage the enemy in close combat.

During the ceremony their commander addressed the troops, expressing his pride in their accomplishments and exhorting them to maintain their preparedness going forward. He reminded them that, as we all learned on 9/11, there is no longer a front line. Our enemies, he said, are everywhere, and the US soldier must always stand ready to “deploy, engage, and destroy” them wherever they may be found. 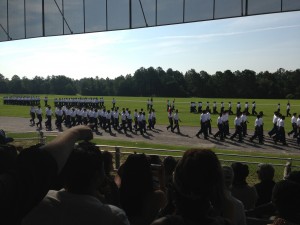 As I watched the ceremony, as I listened to the Army band play, as I observed the ranks of new soldiers, what I kept thinking, over and over, was, “Please, God. Please, please, please don’t send my little boy into battle.”

And I felt ashamed.

I am an ardent patriot, a student of our history, proud to be an American, proud of the way our country was founded and the values that gave it birth. I am deeply grateful for every man and woman who has served our country in the armed forces, whether during war or in peacetime. And I’m proud of Benjamin–and his wife and his older brother, who currently serves in the Navy–for choosing to enlist in the US armed forces.

But it appears that my patriotism reaches its outer limits at the prospect of my son going into battle. And that shames me a little. Yet I suspect every soldier’s mother has prayed the same prayer I did. Perhaps that’s just the natural tension between patriotism and motherhood. A mother's protective instincts, it seems, don't fade just because her baby is grown and on his own and taller than her.

I wish I could keep Benjamin (and Jennifer and Matthew and all my children and their spouses) safe under my wing, but of course that's not my job anymore. Now that they're grown, my job is to support and encourage them–and pray for them.

But that doesn't mean I can't sometimes long for the days when they were tiny and safe in my arms.

What do you think? Do you have (or have you had) loved ones serving in the military? How do you think we can best support our young soldiers and sailors and airmen–and their families?

As this post goes live, I’m packed and ready to run away from home. This weekend I’ll be holed up at a Dallas hotel with a writer friend of mine. She and I were talking a few weeks ago, both of us lamenting how close we are to finishing our respective manuscripts, but our daily lives and writerly insecurities keep getting in the way of typing “The End.”

In The War of Art (a book I recommend highly for people who pursue creative endeavors of any kind), author Stephen Pressfield writes about “resistance” as a force everybody has to overcome when attempting to do anything that matters. He says that resistance increases as you near the end, and boy, has that been true for me!

The War of Art: Break Through the Blocks and Win Your Inner Creative Battles

So my friend and I decided to run away from home (together) and spend the weekend in a marathon writing/editing session. I don't like being away from home for the weekend, but I’m hoping this focused time will help me get over the hump so I can finish this project in time to meet my goal of sending it off by the end of the month to the agent who asked for it 8 months ago! If you think of it from time to time, I’d appreciate your prayers for a productive time of writing.

Before I disappear for the weekend, though, I wanted to fill you in on a few random things:

One last request: If you’re a pray-er, I’d appreciate prayers for my sons:

So what about you? Are you battling resistance with respect to something you’re trying to accomplish? What do you do to overcome it?

See you next week!