I know. Dumb question. Everybody feels that way sometimes. We all have barriers that make achieving our goals or dreams seem difficult some days, impossible other days. Whatever it is we want to accomplish, we can be fairly certain that we'll run up against challenges that wear us out, leaving us sometimes feeling discouraged.

One of the barriers I have to deal with in my writing is the feeling that everything I want to say has already been said, and better than I can say it. That came up this week. I need to get another post written for a blog that I contribute to. I struggle to come up with fresh ideas. An idea came to me of a topic to write on, and I was turning it around in my mind, thinking through what I wanted to say. Before I could get it written, though, that blog's daily email hit my inbox, and the day's post was on a topic very similar to what I had in mind. And the writer did a pretty good job of covering it.

It threw me a bit. Maybe I was just tired, or hungry, or hormonal, but I spent some time that afternoon feeling like, “What's the point of trying?”

I've felt that way before. I've only recently been admitting out loud that I'm working on writing my first novel. Something I've wanted to do for years. But in the past, every time I'd start, I'd get discouraged, because I'd start thinking about all the writers whose work I admire, and I'd conclude that I can't possibly write like them, so why try? Or I'd read another novel that had basically the same story concept as I was thinking about.

What I want to do has already been done. If I can't come up with a new idea, what's the point?

The fact is, everything has already been written. But I realized a couple of things that helped me get over my discouragement this week:

First, even though everything's already been written, everybody hasn't read it yet.

Second, even though it's all been said before, nobody will say it quite like me. 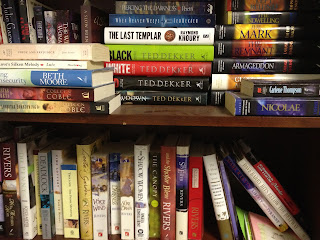 These two truths are why so many new books get published every year, why so many new movies come out every year, and new TV shows go on the air. Believe it or not, there still are lots of people who haven't yet read The Hunger Games or Twilight or even the Harry Potter books. And some people never will. So there's still room for stories that explore the same themes in a different way, using different characters in a different setting. Even though every story has been told already, most multiple times and multiple different ways, there still are people who haven't seen the “old” ones. And even those who have seen the old ones want to see another version of the same story. People who like romance novels read lots of romance novels. Every romance novel tells the same story, but they keep selling because there's something in our hearts that wants to hear that story over and over again. Every action adventure movie has the same basic plot, but we keep buying tickets because we like the thrill of vicariously experiencing adventure.

When I put my blog posts out there, or when I write my novel, I'm writing for a different audience than the people who've read other people's versions of similar messages. There are people who read my “stuff” who haven't ever read the other “stuff.”

And even if I'm covering the same topic, or a similar plot line, what I write will be different because I am different. My point of view is different, because my background and experiences are different. I will choose different words to say what's been said before. I will come at it from a slightly different angle.

When I get discouraged, I can remind myself that, first, it's true — everything has been said. The writer of Ecclesiastes said centuries ago that there is nothing new under the sun. But the fact that somebody else has already said what I want to say doesn't mean that I shouldn't say it too. Some things bear repeating. So even if what I want to say has been said before, I can still say it. I'll say it to my different audience, using my different words, my different style. And it'll be okay.

If you're a writer (current or wannabe) or speaker or communicator of any kind, the same is true for you. No matter how many other people are out there saying the things you want to say, your voice is different. Your voice is needed.

Whether you're a writer or not, what barriers stand between you and the things you dream of doing? How do you encourage yourself to keep trying? I'd like to hear from you. Maybe we can encourage each other.

Laura
I Was Just Thinking . . .
Email me