I can't remember now why I decided to download the sample of Composing Amelia. Probably a blog post describing it or something like that. But I read the sample on my Kindle and immediately bought the whole book, and read it over the course of a couple of days.

The title character is a young newlywed with dreams of a successful career as a concert pianist. Her new husband has recently finished seminary and is seeking a position, hopefully on the staff of a large church somewhere in one of California's big cities, with dreams that together they'll serve the community and build a life together. When Amelia gets a gig playing in the pit orchestra for a new musical theater troupe, she's sure that it's a first step on the path to the career of her dreams. But then Marcus is unexpectedly offered a job as senior pastor of a small rural church . . . in Nebraska. As their dreams, and their understanding of God's plan, collide, Allison begins to wonder whether marriage, and her relatively new Christian faith, both were mistakes.

This novel explores a number of interesting themes: what marriage means; how our parents' example can influence us (for good or for ill) without our even realizing it, mental illness and how it's perceived in the church, and what it means to follow God. Although probably not the predominant theme in the book, it's this last theme that I found the most compelling. In a scene near the end of the novel, Marcus meets Ryan, a pastor at another church, and admits the struggles that he and Amelia are dealing with, including his own fear that he's chosen the wrong career for the wrong reasons. Ryan responds with words of wisdom that resonated with me: “Instead of asking God where else you should be, try asking Him what you should do now that you're here.”

Strobel addresses some serious, emotional themes in the context of a story that seems real and believable. She doesn't preach, but lets us watch Marcus and Amelia's struggles play out without oversimplifying or sugarcoating. She doesn't give the easy answers or the trite resolution. But at the end, there is hope.

I recommend this book for those who enjoy a good story that gives food for thought. It's available at Amazon.com.

Let every nation know, whether it wishes us well or ill, that we shall pay any price, bear any burden, meet any hardship, support any friend, oppose any foe to assure the survival and the success of liberty.

In honor of all those who serve . . . and those who have gone before. 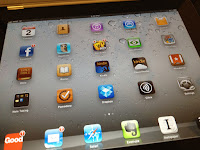 I'm blogging again today over at Stepcase Lifehack, this time sharing some tips on getting off the multitasking treadmill (easier said than done, right?). If you're feeling overwhelmed and overly distracted, you might find something useful there.

Here's a link to my guest post there. I hope you'll stop by and read it, and leave a comment there with your thoughts.

In a previous post I shared a list of some of my favorite blogs. These are blogs that I think everybody should check out and most people will benefit from reading regularly. Their focus is relatively general, offering information relevant to most people's lives.

Today I want to share another list of favorite blogs. These are more narrowly focused–they are particularly of value to moms (of varying stages of life). Most moms that I know will appreciate the blogs I recommended in that previous post (here), but the blogs below offer content especially targeted toward moms. If you're a mom (or expect to be at some point in the future), consider visiting–and subscribing to–one or more of the following:

The internet is awash with blogs aimed at women, some better and more useful than others. Of those blogs that specifically speak to moms, these are some that I enjoy, which isn't to say that I necessarily agree with everything they say. You can click on the blog titles above to visit them and see whether you like them.

Which blogs do you enjoy most? Leave a comment below with your recommendations so we can all check them out.

I'm delighted to be blogging again this morning over at Stepcase Lifehack, this time about how to restore sanity when you're about to lose it. My post's title refers to workplace sanity, but don't be fooled — I'm not talking about just the office. I used to use the same techniques when I was home full time with my kids!

Here's a link to my guest post there. I hope you'll stop by and read it, and leave a comment there with your thoughts.